Use hCaptcha with dotnet and ASP.NET Core 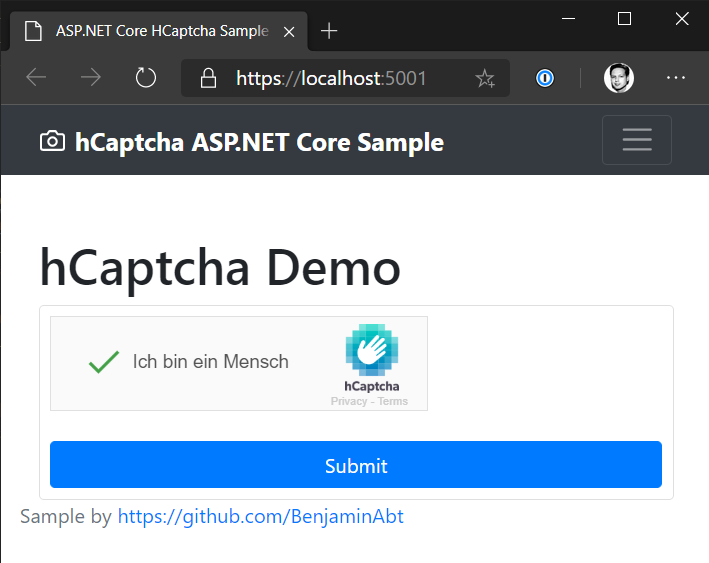 Use hCaptcha with dotnet and ASP.NET Core

Many websites protect themselves from automated access with reCaptcha, a Google company.

The top dog can be found on almost every website.

What few people know is that there are real alternatives to reCaptcha: hCaptcha.

They also say of themselves that they are superior to reCaptcha, especially in terms of privacy and data protection - with identical results in terms of bot checking.

hCaptcha itself is still relatively young, so the documentation is not as good as reCaptcha. The documentation really only covers the essentials, which is sufficient for the basic setup.
Integration is currently only focused in web applications or applications based on HTML and JavaScript. There is no other possibility - right now.

Both variants are implemented with the help of JavaScript. The APIs are currently not quite as flexible as reCaptcha.

Otherwise the functionality is relatively similar:
The client receives an Id which is sent to the server. On the server, the captcha API must then be addressed to get the result of the check.

Currently there is no documentation how hCaptcha can be integrated into .NET or ASP.NET core applications. The documentation here is really limited to the basics of HTML and HTTP.

hCaptcha has now received some data to create a list of community contributions:
https://github.com/hCaptcha/hcaptcha-integrations-list

I contributed the example of .NET and ASP.NET Core: https://github.com/BenjaminAbt/hcaptcha

For the use in .NET and ASP.NET Core I have created two NuGet packages:

HCaptcha is registered via the services, whereby the necessary configuration is also registered here.

The configuration is limited to the most necessary: The hCaptcha SiteKey and the Secret. Both information are part of the site registration in the hCaptcha dashbaord.

In case of use I have primarily decided to use a model binder.
Even if a ModelBinder is not the primary way to use it, it is a very convenient way to validate a captcha.

A model binder is called in ASP.NET Core when a specific data type is part of the parameter list of an action.
For this I created the HCaptchaVerifyResponse type.

Once this type is part of the action, the captcha is automatically validated in the background before the action is called. The result is then part of the instance.

The alternative would be a corresponding service filter.