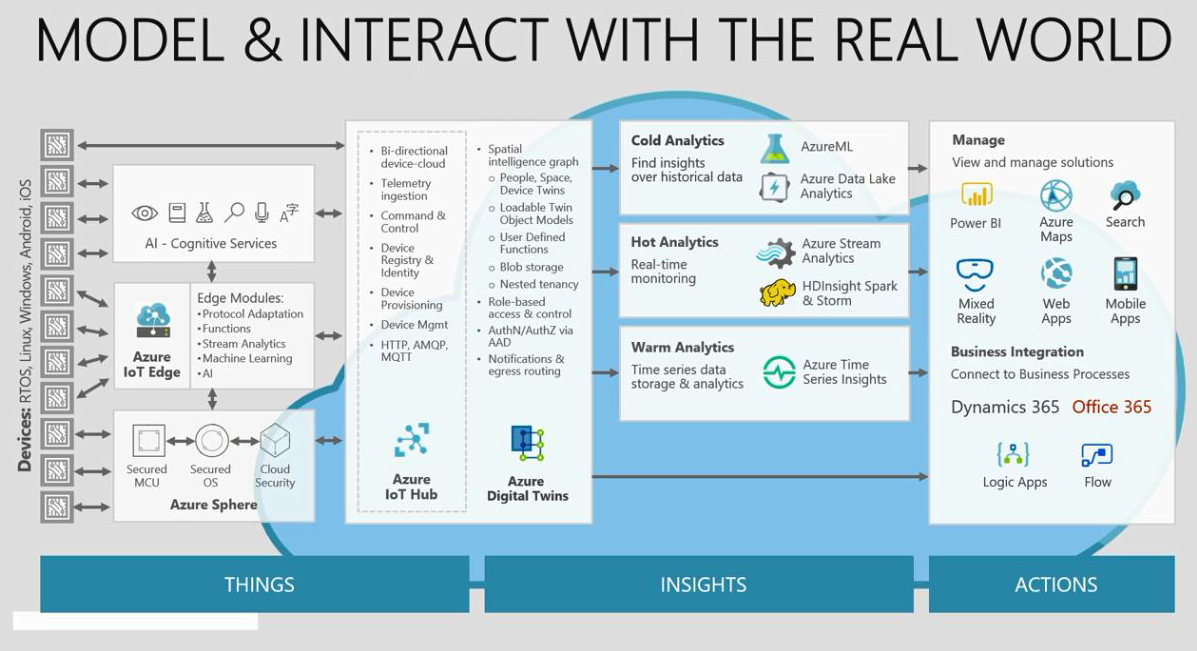 Again and again you read about Device Twins, Digital Twins or Device Shadows - but what is that actually, and why do the names sound so similar?

A Device Twin is the image of a device, mostly the configurations, current status information (e.g. battery charge level, connection quality...) or certain metadata (mostly untyped Key Value pairs).
This information usually comes directly from the device and is synchronized with the cloud. The point is that this information is also requested directly in the cloud and so the status is not constantly requested live on or from the device.

This relieves the device itself, the connection to the device and makes the access in reports, in applications or also in the general overview easier and more performant.

In the case of Azure IoT, this information includes the general properties of the device, tags and metadata. Actions and events are not part of the Device Twin. In AWS IoT basically the same functionality is named Device Shadow. The name Device Twin is in general more comon.

From a functional point of view, a complete environment - for example a machine with sensors, a facility with sensors and actuators or an entire factory building - is digitally modeled. Data from physical sensors are fed into the digital models and are thus accessible for complex streaming analyses, for example.

One of the goals - currently also referred to as next generation iot development - is to increase the development speed of IoT devices, as digital twins can be used as development replacements for physical devices.
Especially when it comes to AI, which depends on good models and a lot of data, this approach benefits: often it is only later, after a hardware has been developed, that one realizes that more data is needed to fulfill a use case.

The risk of "forgetting" something that is crucial for success is reduced by development based on Azure Digital Twins.

Azure IoT offers the Azure Digital Twin Service (PaaS) for this purpose, with the help of which the models can be implemented and data from IoT devices can be embedded.

One of the most important functions, which plays a big role for me and especially for my customers, is that with the help of Azure IoT Digital Twins a new and specifically implementable DevOps scenario is also possible.

With the help of Azure Digital Twins, it has never been easier and more reliable to have devices with specific configurations - and to test them beforehand.
If I have a large production facility with many different halls and machines and corresponding production lines, I have to test the interaction between man, machine and environment in detail beforehand - and then deploy it safely.

This is exactly what is now possible with Azure Digital Twins.

The only downer is that Azure Digital Twins is currently in preview status and therefore not yet allowed by many customers :-(